Pupils of Holbrook Area School in 1934

There has been a village school in Holbrook for more than 150 years. Originally, the building now known as the Primary School was called Holbrook Elementary School, teaching Holbrook children from age 5 to 13 or 14, with a Pupil Teacher Class for more able pupils.

In the 1930s, what was called the ‘Top School’ was built. The two buildings were run by one headteacher and became known as Holbrook Area School. 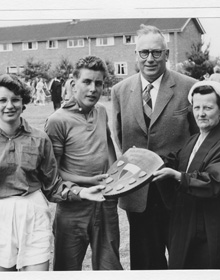 This arrangement continued until September 1954 at which time the two parts of the school separated; the Primary appointing its own head and the ‘Top School’ becoming Holbrook Secondary Modern School. With the coming of comprehensive education in the 1970s, it became a High School.

The school opted out of local authority control in 2011 and was renamed Holbrook Academy in 2013.

The Academy is grateful to Marion Leeson, Holbrook Parish Recorder and a former teacher at the School, for her agreement to help prepare a more detailed history. If you have material, particularly photographs, you believe might be useful, please let Marion know via the Academy.