Mental health is a huge part of our society: one in 5 of us are affected by it and it is very common among teens. However, not everyone understands the far-reaching effects of metal illness. In this report we try to cover what exactly mental health is and how it impacts upon the young people in our school.

The effects of mental health on young people.

Mental illnesses can have a huge impact on high school students; from social anxiety to suicidal thoughts. Many people live with a mental health problem or can develop one, however they either keep feelings hidden because they are afraid of other people’s reactions or just don’t know enough about it to get diagnosed.

We interviewed a range of students from Holbrook Academy, from Year 7 to Year 11, to find their opinions on how mental illness affects their lives and to understand what impact this is having on our school.

Our first question was directed towards a focus group of two girls and two boys in Year 7- we asked them their opinion on how mental illnesses affects girls/boys of their age category. They answered “school can make us stressed about little things.” However, they also said they were stressed at the start of high school but “teachers helped us settle in.”

We also spoke to four Year 8 girls and they told us, “Being a girl, I’m scared to do certain things, and we put ourselves down because we want to be like someone else.”  They also told us how they feel pressured to be ‘perfect’ and that this can cause high stress levels.

When asked who, in the school, they would turn to if they were suffering from mental health problems, they said would probably turn to the drop-in school nurse to help.

Finally, we wanted an opinion from the oldest students at the academy, who are under a huge amount of stress during exam time. We asked how exams had increased their stress level and they responded, “Exam stress can have a big impact on school work,” and that they spend so much time worrying about school that they forget to care for themselves.

Depression and anxiety: a hidden issue?

56% of the students we interviewed did not know who to talk to if they or their friends got depression. This shows that even if it was recognised they would not be able to deal with the issue effectively.

There is still a lot of progress to be made: 81% of the people we interviewed feel uncomfortable just about talking about mental health. Awareness must be raised, and if we act sooner, rather than later, we will have an easier job in stopping reaching those that need help.

What limits the support available to people?

Sometimes it feels like we are living in a world that is more worried about luxury and gifts than giving money to important causes such as mental health charities, but in actual fact the choice is much harder. When we spoke to Mrs Rogers, Finance Manager at our school, she commented, ‘Schools struggle to make ends meet. Most money goes on supplies like book and staff.’ This leaves little to tackle the issue of mental health.

To make matters worse, people with mental health issues are usually very scared of being judged and perceived as “different” or “crazy” by other people if they ask for help. Lack of understanding and knowledge is only making things worse for the people suffering from serious illnesses.

The few people who do actually understand are being pushed to breaking point. Some schools are struggling to make ends meet enough as it is, let alone employing support staff who can help people with mental health disorders.

Not enough funding is being given to mental health charities for them to be able to get the resources needed to help people.

‘Young men are particularly more reluctant to reach out,’ commented PRE teacher Mr. Anstee-Parry, perhaps because they wish to seem fearless and too cool to ask for help.

Clearly, although we have come farther than we were about fifty years ago but we haven’t come as far as we should have done and there are still some very serious issues surrounding  mental health.

Having asked a series of Holbrook students some questions on mental health we gathered that there isn’t enough awareness of how our school is successfully supporting people.

Owen, Year 8, defines being ‘mentally well’ as, “To be fit and have a strong mind”. Owen said that he thinks that the teachers seem effective at helping  people that they know have health problems, but don’t always have time to check back on people that are only now starting to suffer with it.

Mr Anstee-Parry, PRE teacher, explained in depth to us of the real flesh of mental health at Holbrook Academy. He explained to us what it meant to be mentally well: ‘To be resiliant and able to take on challenges.’

It seems that students are affected by depression due to isolation. This could be a problem because they would start to lose interest in lessons because they are worried about their home life. Mr Anstee-Parry also highlighted the need for a full time councillor in school: this would improve other people’s mental health and take weight of people’s shoulders.

Direct discrimination is when someone treats you differently because of your disability, and in this case, Mental Health issues. This type of discrimination is usually one of the main causes of depression for people (adults and children) with mental disorders.

We interviewed 8 student of all ages to see their views and personal opinions on this life changing topic. Most students agreed that there was some form of discrimination against children and adults with mental disability.

We asked Martha, Year 10, how we should deal with discrimination around the world and she said “perhaps trying to see in other people’s eyes and not taking it as a negative will result in a better understanding.”

What impact can modern media have on wellbeing?

Mr Clarke, an ICT teacher at Holbrook Academy and the school’s E-Safety advisor, stated “Social media has both positive and negative impact on the use of the internet. It’s positive if your family is spread around the country, or even world. On the other hand, social media is such an open and free place but it’s easily abused. Say, if a child was browsing the internet, they might not have been taught what they can and can’t see.”  He also said “The age limits are a good guide but they are easy to overcome. Some websites don’t have enough depth or verification.

“My main concern is that young people are checking their social media rather than actually sleeping. And it creates an inability to build relationships in the real world, which will have an adverse effect in school or the workplace.”

How might you cope and who can you turn to? Our school offers weekly visits from a school nurse, who is trained to support young people with these issues. A friend can be an obvious person to confide in; but teachers, parents and even your GP can be excellent people to talk things through with and direct you to services that can offer support. 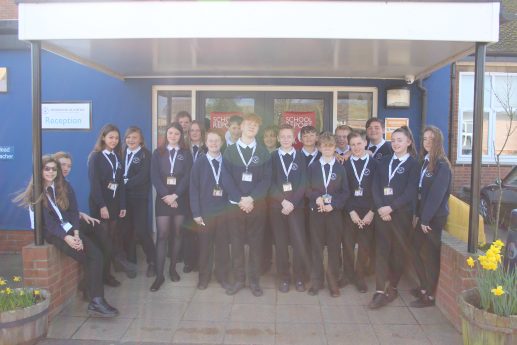 Students from Holbrook Academy are taking over the news today as part in the BBC School News Report 2017.

This year, we are giving Year 8 students the opportunity to see what it feels like to be a news reporter for the day. Following a tense and hard-fought student vote, we have chosen the topic of Mental Health and Wellbeing. We thought that this would be a good topic to do so that we can find out and report how it is effecting the young people we know and work with, as well as wider issues in the UK. We will be interviewing staff and students to see what their views are.

Kia, a student taking part today, commented, “We are very excited to be able to take part in this, and to be part of BBC News. We are very grateful to the people that have organised this as it is an amazing experience.” Our newsroom has eight separate teams, all tackling aspects of this complicated and topical issue.

Check back after 16:00 GMT this afternoon to see our report.

Students from Holbrook Academy will be making the news for real on 16th March 2017 as they take part in BBC News School Report. We aim to publish the news by 1600 GMT, so please save this page as a favourite and return to it later.